Recently, Neil Parille started replying to tweets I had made, in which Parille criticized Yaron Brook regarding immigration. Given the number of his comments, it started to seem that I was being trolled, but it turns out that Parille has been trolling Brook and I simply walked into his muck. My take away from this exchange is that Neil Parille was being dishonest in his criticism of Brook’s positions on immigration.

It all began for me when I tweeted a video of Yaron Brook’s “Free Will and Free Borders” from AynRandCon 2016. [EVENT: Ayn Rand Student Conference 2017 will be held 11/3-5.] As part of a theme from that conference exploring free will, Brook discussed the role of free will vs. Determinism in the immigration debate.

In response, Parille replied with tangential concretes which seems too obviously trolling for a response, so I moved on with my life.

A week later Parille started up with a flurry of replies on immigration, after I retweeted a compliment Rob Schimenz made about Yaron Brook in the context of Brook’s availability to speak to campus and other groups.

I’m not going to get into every reply Parille tweeted, but instead focus on a few points of evidence; you can go to Twitter for the full exchange if you have nothing better to read. In general, every time I demonstrated Parille’s factual errors, instead of acknowledging his error, Parille would change to a different point; it was willful dishonesty on his part. A relevant point Rand made, from which Parille would benefit:

Intellectual honesty [involves] knowing what one does know, constantly expanding one’s knowledge, and never evading or failing to correct a contradiction. This means: the development of an active mind as a permanent attribute. [“What Can One Do?” Philosophy: Who Needs It, 201; via Lexicon]

Bizarrely, Parille challenged whether Brook (co-author of Free Market Revolution: How Ayn Rand’s Ideas Can End Big Government) is an advocate of freedom. As evidence, Parille asserted that Brook is in favor of the current immigration crisis in Europe.

In response, I identified that Parille was in error and provide a 15-minute video clip from 11/15/2015 in which Yaron Brook made a clear statement about recent Muslim immigration to Europe; this proved that Parille’s statement was false.

Parille responded with misdirection and another falsehood.

How could Parille possibly know that what he said wasn’t true? I replied with a link to a post that Parille had himself made entitled Brook Debates Immigration (Believe It Or Not) (6/2/2017). The post is video of an exchange between Canadian-born Gavin McInnis and Israeli-born Yaron Brook about US immigration policy. The debate Parille should focus upon is the contradiction in his own statements.

When you find yourself in a deep hole, stop digging! However, Parille digs deeper with more factual errors.

Regarding Lindsay Perigo, I linked to evidence from Amy Peikoff that Perigo had pulled out of a debate with Brook on her podcast Don’t Let It Go Unheard; in the interview that replaced the canceled debate, Brook directly addressed those who have criticized him on immigration. In response to her statement, Parille smeared Amy Peikoff by stating “I don’t believe amy [sic] wold have enforced the debate rules fairly.” Yet, later he talked about how he tried to get Amy Peikoff to moderate a debate between Parille and James S. Valliant (author of The Passion of Ayn Rand’s Critics: The Case Against the Brandens and co-author of Creating Christ: How Roman Emperors Invented Christianity). That makes no sense; in one moment smearing Amy Peikoff’s integrity and in the next soliciting her as a moderator…more of the Parille versus himself versus reality debate.

Regarding Ed Powell, I suggested that I debate Ed, because Brook has other work to do. I know Ed. He has written a critique of statements by Objectivists on open immigration; it is titled “The Underdeveloped, the Undeveloped, and the Not-to-be-Developed Cultures: Objectivism and an Immigration Policy of Self-Interest for America Today.”  I have it bookmarked to review for a future post as a mutual friend had asked my opinion on what Ed wrote.

Eventually, Parille’s volume of repeating replies became boring to me and I had to get to the essential point about his repeated errors in the face of evidence. 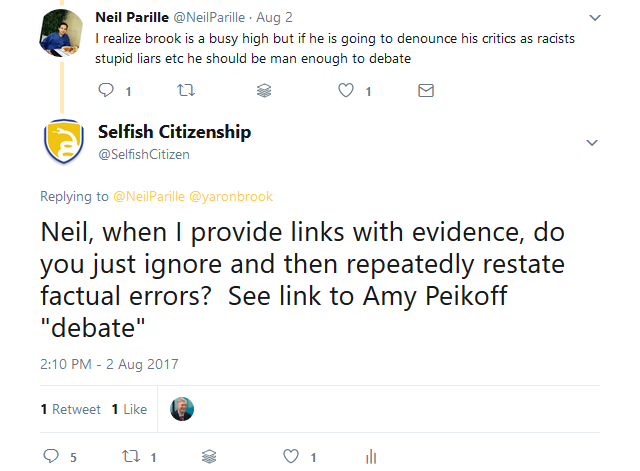 Why does any of this matter to selfish citizens, who already respect honesty as a virtue?